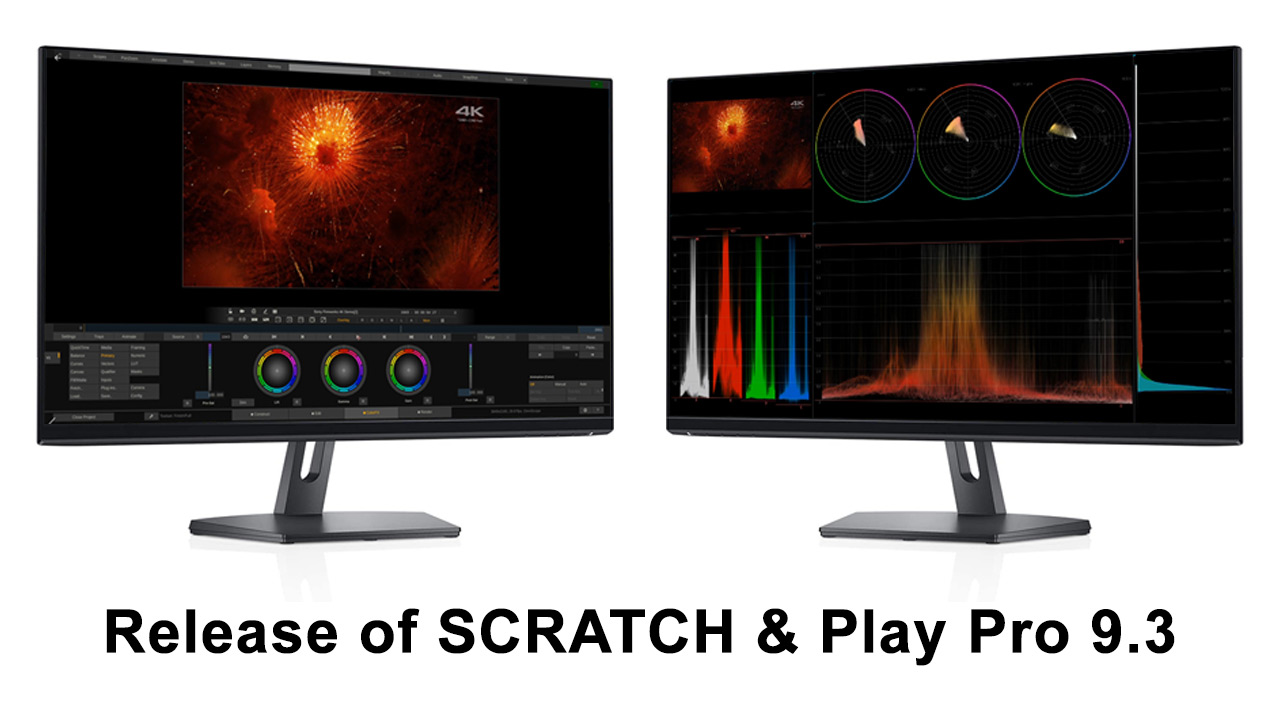 Native NDI Support
Assimilate embraces support for Newtek’s NDI, which takes working in remote workflows to the next level. NDI allows users to easily and directly connect Scratch to various apps such as SetStream.io, OBS, or even Skype and Zoom – no cables, no wires and zero delay! A demo of the new impressive capabilities can be watched at https://vimeo.com/476188656.

Jeff Sousa, colorist at Dungeon Beach in New York, reports, “Scratch 9.3’s native NDI integration adds speed and flexibility to my streaming sessions without the need to purchase I/O hardware or LUT boxes. It allows Scratch to uplink directly to SetStream.io via the blazing fast WebRTC protocol, giving me latency-free interactions with my clients and great image quality. And since NDI is ‘just another output’ to Scratch, I can control exactly what the client sees, toggling masks on and off, and even apply a stream-only display LUT to calibrate their viewing device remotely. When streaming via NDI, I can also round-trip to After Effects for rotoscoping or Avid Media Composer for conform, and the client won’t lose signal on their program, making Scratch 9.3 a powerful finishing hub for remote workflows.”

“The ability to directly integrate ColourSpace in Scratch enables direct profiling and therefore accurate calibration of any attached display. With Scratch acting as the test patch generator, the entire video-signal chain is profiled, ensuring the best possible final-display calibration accuracy. Having the Light Illusion-developed plug-in included within Scratch as standard makes the whole display calibration and verification process as simple as possible,” said Steve Shaw from Light Illusion.

“A trained eye and a high-accuracy calibrated monitor are imperative for any colorist’s work. We’re proud to partner closely with the industry leading solution for monitor calibration that simplifies the creative process for our users with accurate display profiling,” said Mazze Aderhold, manager of product design & worldwide support.

Native Support for OmniScope
Time in Pixels new scoping software, Nobe OmniScope, is now integrated into the Scratch tools so that both can now run in parallel on the same workstation without the need for an external image-analyzer device or additional video-io hardware. “Nobe OmniScope has proven to be the fastest, smoothest, and most precise end-to-end suite of scopes available for macOS and Windows,” stated Jeff Edson, CEO at Assimilate. “Whether you’re working on dailies, color grading in HDR, analyzing reference images, or doing live-grading on-set, Nobe OmniScope makes a highly valued addition to the native toolset in Scratch.”

“Scratch is known for its speed and flexibility, and is valued by professionals across the industry for its ability to perfectly integrate with other applications. Because of the well thought out interface for third-party solutions, we were also able to easily add support for Assimilate’s other tools, such as their excellent live-grading software Live Looks and their reference player Play Pro, which is used widely in video-QC. We’re proud to be working together with the Assimilate team to ensure Nobe OmniScope users can work with their preferred tools of choice without the need to buy further video-io hardware,” said Tom Huczek, founder and lead developer at Time in Pixels.

Increased Productivity Features and Performance, Including New Collaboration Features in v9.3
Scratch now includes a new CIE plot diagram in its internal scopes, and has improved ProRes RAW decoding capabilities. DITs can now precisely define how RAW footage should be processed in Scratch by setting RAW media defaults upfront in the project settings.

Furthermore, Assimilate has re-branded their online review tool, Scratch Web, to Dailies Online and has doubled the available cloud storage for all users at no additional charge. By using Scratch’s recently introduced on-screen annotation features, DITs and finishing houses can not only share dailies, but also increase their productivity in VFX review sessions.

Especially helpful in VFX-workflows is Scratch’s ability to read and forward per frame (lens-) metadata, including recently extended support for ARRI RAW and ProRes MXF to cover RED RAW as well. Along with native support of OpenColorIO, this makes for the most ideal VFX dailies-and-review package to date.

Get Back to Work with Assimilate’s Creative Reboot

“Assimilate offered the Creative Boost Program as the industry suffered its harshest downturn ever. We are responding to feedback during the Creative Boost program that provided everyone free access to all of our tools with both exciting product enhancements and an aggressive pricing of products,” said Edson. “As work begins again, this allows people to more easily access the needed creative tools that will make them more successful in their remote camera-to-post workflows.”

Assimilate develops and offers advanced tools for on-set and post-production workflows that deliver groundbreaking speed and flexibility for industry professionals. Used by DITs and post artists worldwide, Scratch is known for its productivity tools, stability, speed and metadata support for any camera format available. Live Looks is the optimum tool for live grading and direct-look creation with an instant connection to Scratch and live streaming and keying capabilities. Live Assist is the multi-cam VTR tool for video assists, offering support for any number of cameras, any resolution, with easy green-screen comp and local clip server functionality. Play Pro is the go-to solution as a professional player for VFX-reviews, ProRes RAW QC and genuine ProRes transcoding on Windows.